Matt 5:4 As we continue our journey through the Beatitudes (and the theme of Living Right Side Up in an Upside Down World), we come to Beatitude #2 – “Blessed are those who mourn, for they will be comforted”. Yes Jesus actually spoke these words, which seem to make no sense at all, and yet, these Beatitudes are not commands to strive to keep but descriptions of what kingdom people look like. So if this Beatitude is true of us, then what kind of mourning is Jesus talking about and how can we possibly be blessed or comforted?
09/25/2016

Matt 5:3 This week we will begin taking a Sunday for each Beatitude found at the beginning of Jesus’ Sermon on the Mount. In this famous passage, Jesus is describing what happens to people when they attach themselves to him. He goes up on a mountain and begins to teach them by describing the character traits found in people attached to him. Jesus starts with ‘Blessed are the poor in spirit, for theirs is the kingdom of heaven.’ This verse is the foundation of and sets the tone for the entire sermon. In fact, it is not a bad idea to read it before every other verse in the sermon. So, what did Jesus mean by ‘poor in spirit’ and what relationship does this verse have to Luke’s version of this Beatitude, which reads ‘Blessed are the poor,’ rather than ‘poor in spirit’ (Luke 6:20)? Hope you will join us as we dig into God’s Word together this Freedom Sunday.
09/18/2016

Matt 5:1-10 Now that we have finished our Judges study, what were the judges lacking? In general, they were lacking character. The judges had charisma, but no character. This Sunday we will kick off a new series we’re calling ‘Living Right-Side Up in an Upside-Down World’ in which we will study The Sermon on the Mount. In this famous sermon, Jesus describes for us what his kingdom life is all about, and it all begins with character. What kind of character do the people of God have? Jesus tells us in the Beatitudes, some of the most famous sayings ever uttered. Some might think Hallmark came up with them, but no, Jesus said them. And, he said them to bring us life! Meditate over them this week and decide which one is your favorite, and which one is the most challenging for you.
09/11/2016

Judg 16:1-31 As we conclude out summer series with the book of Judges, we will examine how to further the kingdom of God when we are living in a world dominated by idolatry, greed and narcissistic leaders. In the days of the judges, men became passive confronting evil in the home and lacked courage go to battle for the sake of the nation. With a vacuum in leadership, heroic women took the initiative to fill the gap. Through the examples of Deborah, Ruth, and Hannah, we will discover the key character traits that bring light out of darkness and hope in the midst of despair.
09/04/2016

Judg 13:1 – 15:20 This week we will take a critical look at the life of Samson, the judge who began his career with the greatest potential and divine privilege, yet fails so miserably, ultimately receiving the gold medal as Israel’s worst judge. In his Old Testament Theology, Bruce Waltke writes that Samson, the Philistine slayer, is also an antihero. He does what is right in his eyes, disdaining his parents, his vows, and God; he cooperates and copulates with the uncircumcised; he is a spiteful manslayer and a self-satisfying whoremonger… This prankish, narcissistic womanizer ironically has no children; he squanders his gifts and does not actualize his potential to completely deliver Israel. We can’t help but wonder why the narrator devotes 96 verses to this narcissistic abuser who lives solely to satisfy his lustful cravings and violently destroys anyone who gets in his way. And why did he place his narrative at the climax of the book? There is much more to Samson’s story than meets the eye. If you allow the narrator to draw you into the story, you just may find yourself alongside Samson buried in the rubble of some idol’s temple, reaching your hand out to the real hero of the book of Judges.
08/28/2016 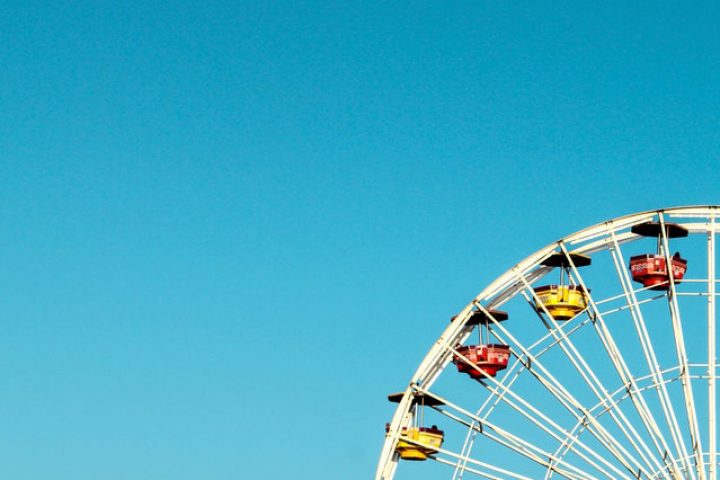 This is the one day when you can peruse all of the PBCC ministries and see where you can get connected! There are new ministry opportunities available since our last Fair. You are God’s people being prepared for works of service so that the body of Christ may be built up. Don’t miss this opportunity to get plugged in and use your gifting so that we all mature and attain to the fullness of Christ! To give ample time for you to peruse the Ministry Fair tables, our Sunday morning service will only run for 30 minutes (8:30am – 9am & 10:30am – 11am), so make sure to arrive on-time. Andy Drake will be preaching on Growing Together.
08/21/2016

As we saw last week Samson was a man ruled by his passions and desires and this manifested itself primarily in relationships – wife, parents, in-laws, and not so good friends. Samson’s problems with women continued after his wedding. In Judges chapter 16, Samson sees a woman in Gaza and then he loves a woman in the Valley of Sorek named Delilah, who ended up costing him his eyes and eventually his life. Relationships can be a real “killer!” In light of Samson’s weakness we realize that we need incredible wisdom and life-changing truth from God and his word. And so this will be our topic for this Sunday, seeking wisdom for interacting with the many different people in our lives.
08/14/2016

Judg 14:1-20 After an amazing birth narrative in Judges 13 one would have expected an equally amazing life. But that is not what we see when we turn to chapter 14. Despite a special calling on his life, Samson sees a Philistine woman and immediately wants her for a wife. We see in Samson a man who is physically strong and Spirit-empowered but one who is ruled by his passions, especially lust and anger. Like Samson all of us can be tempted by our desires to act outside of God’s will. But as recipients of God’s grace through Christ we are called to have control over these desires, to “flee youthful passions and pursue righteousness, faith, love, and peace, along with those who call on the Lord from a pure heart.” (2 Tim 2:22 ESV)
08/07/2016

Judg 13 This Sunday, we begin a 5-week excursion into the life and death of Samson – outwardly powerful but inwardly flawed. Just like his immense strength, Samson’s mistakes are obvious, the motivations easy to see and really the only puzzling thing is why God would even choose to use this man in the first place. And yet Samson too, like the flawed Jephthah last week, makes it into the Heroes of Faith of Hebrews 11. In our opening scene this week, Samson, himself, actually barely makes it onto the stage. Instead we meet his parents and are faced with questions like: What does a faithful God do when His people are too lost to even cry out to Him? What would YOU do if an angel showed up? Are we missing the wonders that God is already doing in our lives?
07/31/2016

Judg 11:1 – 12:15 As the spiritual condition of Israel declines in the book of Judges so goes the character of its judges. This week we will look at the story of Jephthah. Jephthah was an outcast who was disinherited from his family. Even though he is listed in Hebrews 11 as a man of faith his story is one of contention and ambition. His foolish vow costs him his daughter and is one of the saddest stories in all of Scripture. And yet Jephath can teach us valuable lessons about spiritual wisdom and leadership. Since there is way too much material to cover on Sunday morning, I urge you to read Judges 10:6-12:7 to have the story fresh in your minds.
07/24/2016

Judg 7:1-25 This week we wrap up our 3-part series on Gideon with a dramatic battle versus a huge invading army. (Hint: It does NOT look like a scene from Lord of the Rings!) This “unconventional” battle raises some intriguing questions: Whom does God choose to fight His battle? What weapons are effective to accomplish His purposes? Applying these to my own life, I ponder, “Can God really use me to do His work? I’m flawed and inadequate!” And even if I believe He can use me, I wonder, “How can I prepare to fight His battle? What role should I take?” Do you ask yourself these questions too? Do you wish you knew the answers? Well, I don’t have all the answers. But come this Sunday and together we can find out how God can prepare us and use us for His kingdom.
07/17/2016

Judg 6:33-40 “To fleece or not to fleece, that is the question.” No, this Sunday we’re not doing a biblical adaptation of Shakespeare’s Hamlet, but rather we’ll examine the practice of “laying the fleece” to discern the will of God in making decisions. The judge Gideon used this tactic with God – twice! Is this something we ought to follow? How do we determine God’s will? And when we know His will for us, are we willing to step out and follow Him? We’ll explore these questions and others in our study of Judges 6:33-40. We hope you’ll join us.