1 Pet 3:1-7 “A cord of three strands is not quickly broken.” (Eccl. 4:12 NIV) This verse from Ecclesiastes describing the advantage of being joined with friends and companions rather than remaining alone is often used as a metaphor in marriage ceremonies to describe the union of a man and a woman in Christ. In the world, there is much discord between men and women and husbands and wives. But this is never what God intended. He created male and female so that together they could reveal his glory and grace. The gift of marriage is an aspect of these purposes. Three strands joined together can have incredible influence. Marriage is our topic in the book of 1 Peter this Sunday. But even if you are not married there is much to be gained from these verses that can aid the spread of the gospel in the world.
01/22/2017

1 Pet 2:18-25 “That’s not fair!” Something we’ve all thought time and time again. “Life’s not fair” is a reality we try to teach our children, yet it’s also a reality we struggle to accept even as adults. Jesus had every right on numerous accounts to speak up in his own defense with, “That’s not fair.” But He didn’t. He accepted unjust punishment and suffered an unjust death. This was the model He left for us. How can a passage in Peter that speaks to household servants teach us to better represent Jesus 2000 years later? What does it look like? Here’s a hint from Peter: See the “Suffering Servant” passages from Isaiah 53 for the blueprint to follow!
01/15/2017

1 Pet 2:11-12 As believers, we are pilgrims on the earth making our way towards the heavenly city. The future is certain and we know where we are headed. But we also have a high calling for the present and that is to live not only in a right relationship with God but also within our society. Even though we are weak and imperfect we have been called out of darkness into the light to bring the light of Christ into the world through the way we live our lives. We return this Sunday to Peter’s first epistle, a study we began last winter. We pick up the series as Peter transitions to the main section of the letter. Peter has two concerns. First, when possible they are to live in accordance with the social order of their society. Second, if they suffer for their faith in Jesus (which was already beginning to happen) they are to follow the pattern of Jesus. This is a great word for today, especially in our culture of power and control. People are watching how we live our lives. To prepare for this Sunday you might want to read the first couple of chapters of 1 Peter.
01/01/2017 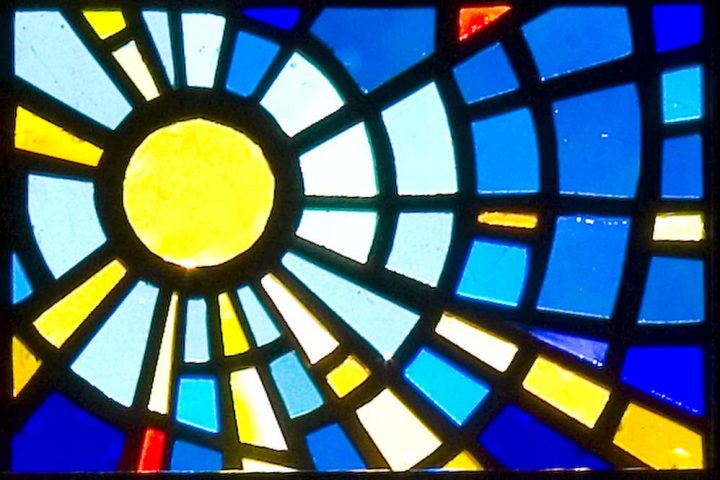 Stories and The Story The Bible contains many stories, some familiar, others unfamiliar. Our new art exhibit depicts many of these stories. The Bible as a whole tells a single story, into which these individual stories fit. Much of this overarching story is depicted in the window which was installed ten years ago. To start the new year we will consider God’s story and how it intersects our story.